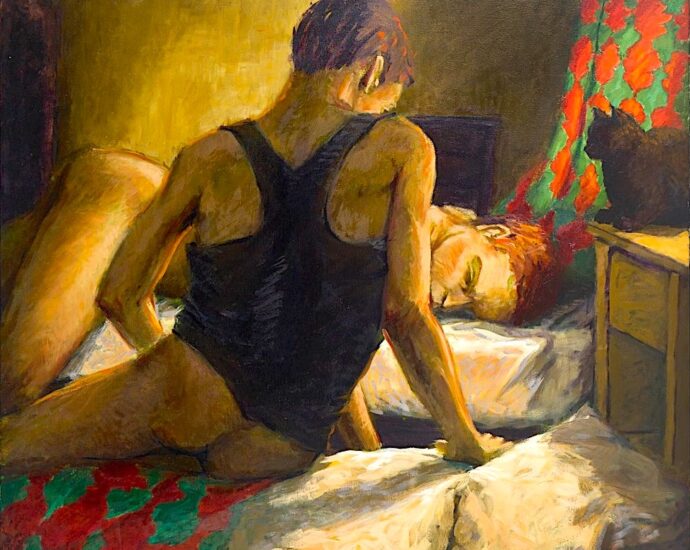 Hugh Steers was born in Washington, D.C. in 1962. He was trained in painting at Yale University and Parsons School of Art and Design. Celebrated for his allegorical paintings that captured the emotional and political tenor of New York in the late 1980s and early 1990s. Particularly the impact of Queer identity and the AIDS crisis.

Steers, who was openly gay, maintained a commitment to figurative work throughout his career, which was cut dramatically short by AIDS at the age of 32. Influenced by historical figures of American art, including Thomas Eakins, Edward Hopper, and Paul Cadmus, Steers embraced representational painting and figuration at a time when such approaches were especially unfashionable.

Steers painted in a style that mixed allegory with Expressionist realism, incorporating many art history references. His work increasingly dealt with AIDs, depicting pairs of men bathing, dressing each other, and embracing. Hugh Steers’s work is featured in the Whitney Museum of American Art, the Denver Art Museum and the Walker Art Center in Minneapolis. A catalogue of his work was published by Visual AIDS in 2015.

“I think I’m in the tradition of a certain kind of American artist—artists whose work embodies a certain gorgeous bleakness. Edward Hopper, Jackson Pollock, Franz Kline—they all had this austere beauty to them. They found beauty in the most brutal forms. I think that’s what characterizes America, the atmosphere, its culture, its cities and landscape. They all have that soft glow of brutality.”