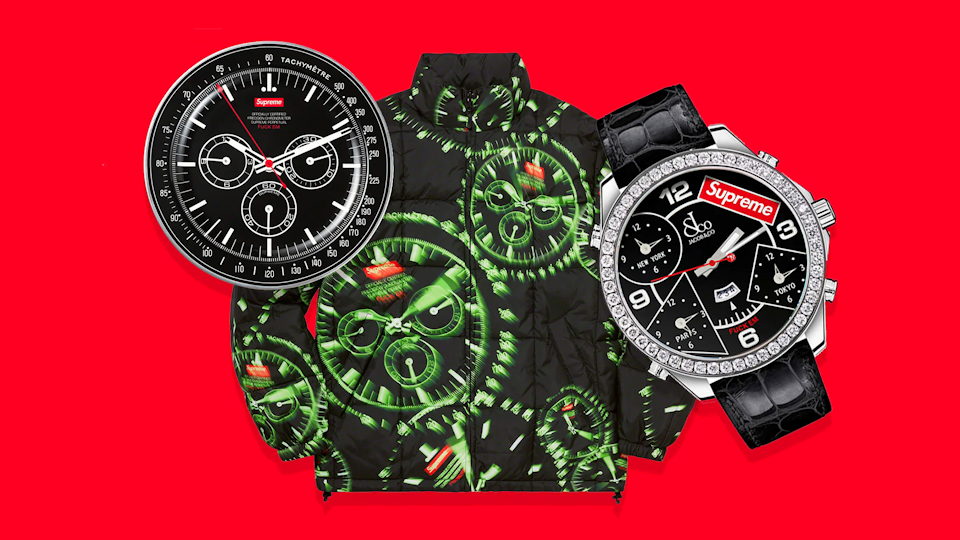 Consider the gap between luxury watches and streetwear officially closed

Y’all know what time it is? If you’ve spent all day scrolling through the new Supreme fall/winter 2020 collection, the answer to that question is likely a resounding yes. Because the new collection from everyone’s favorite box-logo brand is its most watch-heavy ever, complete with more mind-melting ways to tell the time than a Dalí painting.

After collaborating on an uber-affordable Timex last season, Supreme’s gone in the opposite direction and is pointing itself directly at the world of luxury timepieces. A series of jackets feature a print of a dial clearly inspired by Rolex’s Cosmograph Daytona. Supreme takes a couple liberties with its version of the watch’s face: it says “Supreme Perpetual” instead of “Oyster Perpetual” and the bottom line reads “Fuck Em,” which would certainly be a hard left turn for an official Rolex. (The phrase does also appear on a Rolex Submariner that Supreme customized in 2013, although that wasn’t an official partnership.) The design appears again on a 12-inch plate—the hottest menswear status symbol in the game! The literal jewel of the latest watch-centric Supreme releases, though, is a collaboration with Jacob & Co. The jeweler’s Five Time Zone watch now includes the Supreme box logo—and, of course, a “Fuck Em”—alongside more than 50 white diamonds.

Let’s start with the Rolex-inspired print. Supreme’s choice of the Daytona aligns neatly with the biggest headlines from the world of watches. For several years now, the Rolex Daytona has been one of the hottest, if not the hottest, watch model in the world. In 2018, a version of the watch owned by Paul Newman sold for $17.8 million, breaking the world record for most expensive wristwatch ever sold. (A $31 million Patek Philippe that sold last November now holds that title.) In a lot of ways, the Rolex Daytona is the Supreme box logo of wristwatches. In early 2016, the New York Times described it as “the Hottest Watch That Money Can’t Buy.” That sentiment will be familiar to anyone who has tried to purchase a Supreme box logo on one of the brand’s Thursday drops. Like a box logo, most versions of the Daytona are rare, drooled over, and its retail price only belies its much higher true market value.

Reading between the lines further, the Daytona is also emblematic of a shift in the sort of watches considered valuable. The most famous and valuable versions of the Daytona are stainless steel sport watches, rather than the seemingly more pricey gem-set versions or ones that come in precious metals like yellow gold. That’s because, as the world has turned more casual—making the types of clothes Supreme makes suitable for the office and everyday life—it has gravitated away from the dress watches that would naturally pair with both lower- and upper-case suits. Nowadays, much of a watch’s value is contrived from factors beyond what it’s made of: Paul Newman’s Daytona is worth almost $20 million because of who owned the watch, where it’s been, and how rare it’s become over time. Supreme, by stamping its logo on the dial and writing out its unofficial potty-mouthed slogan, is making the same statement: it’s not necessarily valuable because it’s a Daytona, it’s valuable because of the way it’s been modified. (Eric Wind, the owner of Wind Vintage, speculated that Supreme is signaling that a custom Rolex Daytona, like the Submariner it put out, is imminent.)

So far, Supreme hasn’t yet managed to woo the watch world. Rolex expert Jacek Kozubek says he “would not” cop the jacket, even with the reference to his favorite brand. “It’s too loud.”

But it gets louder. After Drake wore a Jacob & Co. watch with a roulette wheel on it and a The Godfather-themed timepiece, I assumed there was nothing left the brand could do that would surprise me. Enter this collaborative timepiece with Supreme. The Five Time Zone is Jacob & Co.’s signature “entry-level” timepiece—retail prices start in the low five figures—and this partnership arrives right on schedule. After featuring heavily in the lives of rappers in the ‘90s and early 2000s, Jacob & Co. zoomed back into prominence this year: the brand’s pieces have appeared on the wrists of folks like ASAP Rocky, Drake, and Virgil Abloh, who collaborated on a collection with the jeweler that included a diamond-encrusted paperclip. In a single piece Supreme was able to put together all its interests: ‘90s hip-hop, over-the-top branding, and a dash of the nefarious (brand founder Jacob Arabo was arrested on charges of money laundering in 2006).

The streetwear brand’s turn to horology actually feels like a long time coming—the logical conclusion to something foreshadowed years ago. During the $17.8 million sale of the Rolex Daytona, Phillips’ auction house was packed wall-to-wall with a whole section of people crowding into standing room in the back. One image lingers from that night: famous collector Alfredo Paramico stood near the front of the room. His outfit? A bright red hoodie from the Louis Vuitton collection made in collaboration with Supreme.