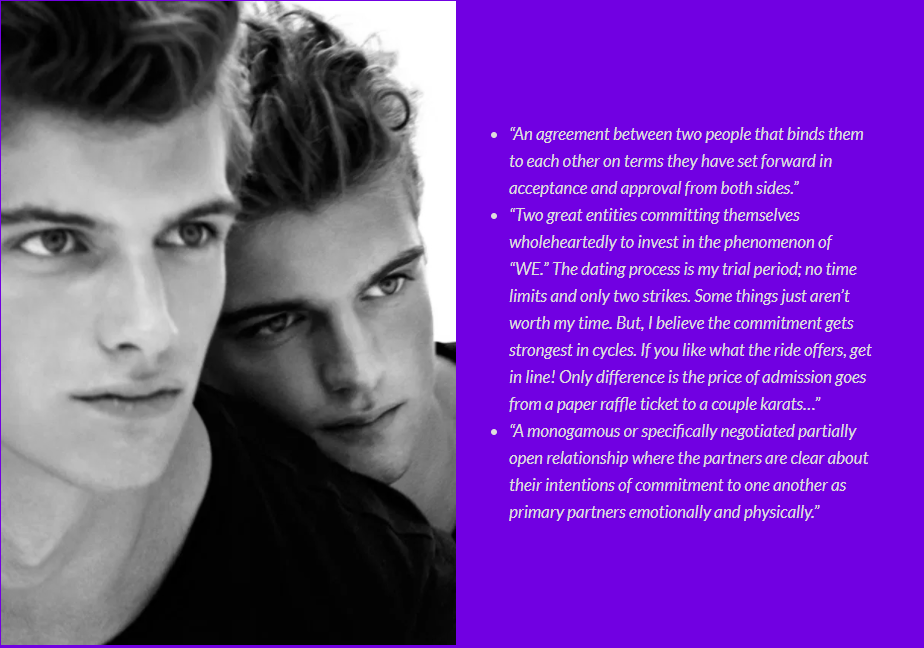 Much research on LGBT relationships is often problem-focused. Relationship violence, sexual risk-taking, or challenges faced by a minority group (violence and discrimination). What is the gay youth’ definition of a serious relationship?

While much of the nation is focused on marriage equality, the question still remains:  How do young LGBT-identified individuals define “serious” relationships for themselves? The IMPACT Program’s Project Q2 asked participants to define serious relationships in their own words.

Open-ended responses were examined and coded by commonly mentioned key words. The most commonly used terms to define “serious relationships” were committed (38%), monogamous (32%), and love/loving (20%). These were followed by trust (15%), honesty (12%), exclusive (12%), supportive (11%) caring (9%), mutual agreements (8%), and faithfulness (8%).  Loyalty, respect, and working together were each mentioned by 6% of respondents.

Less common (< 5%) descriptors included bonded or connected, open communication, future-oriented, being there for each other through “good and bad,” and intimacy. A few others mentioned family, marriage, and romantic or sexual relationships as part of their definition.

Another common theme, mentioned by 16% of respondents, was the length of relationship— most often six months to a year, with frequent or daily contact, or living together. If the time or frequency was not specified, participants often described a “serious” relationship as long-term or long-lasting.

Of course, looking at key words or length of commitment does not give an accurate portrayal of the complexity and richness of participant responses.

Below are a few samples of how participants defined a serious relationship:

For young adults who identify as LGBT, being mindful of how serious relationships are defined and how definitions may change with experience is key to forming healthy long-term relationships. In this study, commitment, monogamy and love are important factors that define “serious.” However, to make these relationships last, others identify key components related to understanding and being understood, communication and problem solving, and actively participating in mutual caring, support, and respect for each other.