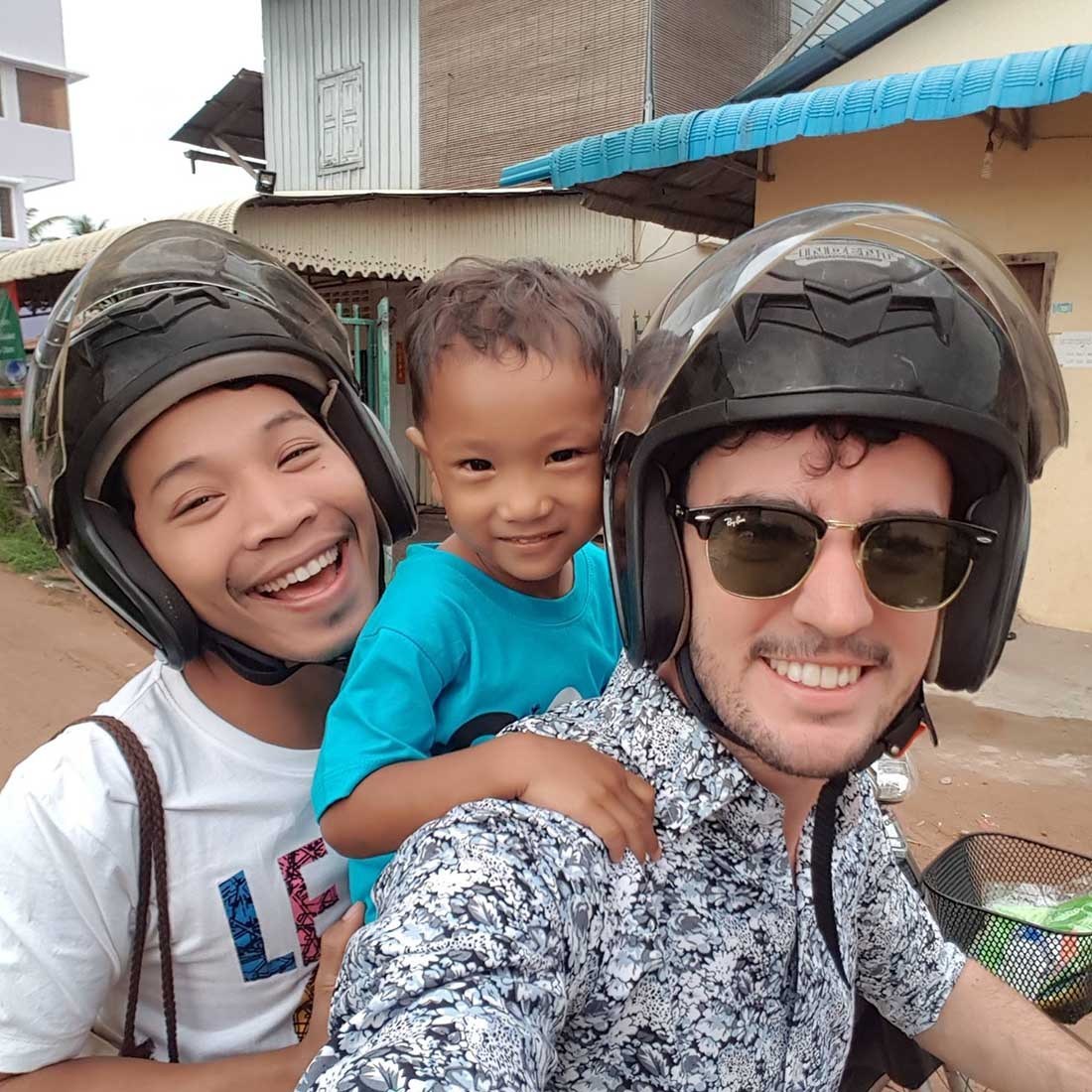 Support LGBT couple operated travel businesses around the world! It has been a while since we have been in Asia after our trip to Japan and, before that, in Vietnam. But luckily, Sarah – our friend and the only girl behind our blog – visited many countries in South East Asia during her half-year backpacking trip this year including Myanmar, Laos, Vietnam, and Cambodia. While meeting with local activists and members of the local LGBTQ+ community, she was able to get an inside in the daily life of lesbian, gay, trans, and queer+ people in these Asian countries.

While traveling around Cambodia, she met Jason and Tola, an Australian-Cambodian gay couple living in Siem Reap. The two guys running literally an LGBTQ+ family business together serving drinks and food as well as offering the local LGBTQ+ community a place to meet, talk, and support each other.

But running a gay café in Siem Reap is not all that the guys are doing in order to do what they really wanted to do their whole life. “We knew we wanted to help the LGBTIQ+ community” – Enjoy our story of Jason and Tola and learn more about how the gay couple from Siem Reap is facing the challenge of the Corona crisis together.

New Life together: From Australia to Siem Reap

Relationships not always start the easy way, especially when you fall in love with a person living in another country. But what if one of the gay guys actually left his ‘first’ life in Australia moving to Cambodia before they actually met?

Our names are Jason and Tola. Jason is from Australia and Tola is from Cambodia. We met in 2014 after Jason moved to Siem Reap. He initially came as a volunteer for two months (building houses, toilets, and wells for families in need), but fell in love with the place, sold all his things, and moved here on New Year’s Day 2014.

From a Broadway show to the stage of a bar, the two guys Jason and Tola met before on stage before their paths crossed once again in a bar where Tola used to dance regularly. And the rest is history…

We met at the bar that Tola used to dance at. Jason had actually seen him several times in a broadway show he also starred in and was raving about him to his friends in a bar one night when he walked in! Turns out he danced at that bar also… so Jason started frequenting that bar and they started hanging out and the rest is history.

We have been together for 5+ years now and started our own café (Krousar Café) in July 2019. Tola continues to perform in one of the only gay bars in town, and Jason runs his own NGO called A Place To Be Yourself (APTBY) – a drop-in/resource center for Khmer (Cambodian) LGBTIQ+ people – and counseling service.

When dreams come true… The story behind the Krousar Café in Siem Reap brings tears to our eyes. Jason and Tola did not know what the future may bring for them together in Cambodia. They just knew they wanted to help the local LGBTIQ+ community. They ended up going into business with Jason’s lovely mom, who relocated to Siem Reap as well…

“Tola never really wanted much for himself – his dream, despite his amazing talents, was to own a small drink shop that sells Coke and other products in bulk. Through Jason and some other Western friends, he landed a job in a Western café in 2014. There began his love affair with coffee and he began to envision a different future for himself. He learned how to make coffee and honed his English and service skills, all whilst starting to collect quirky cups from the local secondhand shop every week on his and Jason’s half-day off together. They piled up in our small room and finally in 2019 we opened our own shop.”

“Our ideas changed over the years – but we knew we wanted to help the LGBTIQ+ community and ended up going into business with Jason’s mum, who had also relocated to Cambodia a few years after Jason. We named our café Krousar Café – the word ‘krousar’ in Khmer means family. That is what we are, and that is how we want our staff, customers, and café to feel.”

A Place To Be Yourself (APTBY)

What you need to be successful with your dream of supporting the local Cambodian LGBTQ+ community needs a lot of courage, heart, and, of course, experience. Jason’s background in social and community work combined with Tola’s first-hand experience living and working as and together with LGBTQ+ people in Siem Reap’s community complement each other perfectly.

“Jason started working for the building NGO that he had initially volunteered with when he moved to Cambodia. The first year, he just volunteered with them and worked in a clothes shop and bar in the late afternoons/evenings to pay his rent and food. After about 12 months of that, the NGO hired him as their Volunteer Coordinator. Jason stayed with them for three years and then opened his own NGO – www.aptby.org. Jason’s background is in Psychology / Sociology / Child Protection and he had volunteered at an LGBTIQ+ drop-in center in Australia before moving to Cambodia.”

“After meeting Tola, and spending a lot of time with his fellow performers – who ranged from straight boys to gay boys, to trans women, to drag performers, to sex workers – Jason thought they could all benefit a lot from a central place where they could be themselves and feel safe and access information relevant to their lives. As well as having this safe space that is locally staffed and open every day, APTBY basically tries to help Khmer LGBTIQ+ in any way they can – they organize community events and have sponsored Khmer individuals to study English, Tourism, Counselling, etc. at local institutions and universities. At the same time as starting APTBY, Jason also started his own counseling service – offering one-on-one counseling and teaching group workshops.”

And then, Corona hit the world…

Like all around the world, local businesses have been affected by the current crisis, Siem Reap is no exception. But the guys have been lucky and well prepared to be able to stay open, even being able to find ways in supporting people who where self-isolation.

“Siem Reap is a tourist town and was severely affected during the Corona crisis. Tourists fled and stopped coming – all expats were encouraged to return to their own countries – and businesses began closing down. We were extremely lucky and remained opened, hoping for the best. We had a few really quiet weeks, but then business started picking up again. We were one of the only cafes still open and started offering free delivery for those who were self-isolating.”

“We, in Cambodia, have not been required to lockdown or self-isolate – though many people have chosen to as much as possible. Running a business and trying to keep it afloat meant that we weren’t able to though – of course, we wanted to stay open for ourselves and to keep our staff employed (many around town were let go and told to keep working but at a % of their usual salary), but we also wanted to keep providing comfort food and coffee to people in town who don’t have cooking facilities as other cafes and restaurants began to shut down. And I really think that our place served as somewhere people could come for some much-needed connection and where people could check in on each other. We stay healthy and happy by managing our time well and trying to give each other space and freedom.”

Final thoughts of the gay couple: “How you can support us and the local LGBQ+ community? From afar, there is probably not so many people can do to support our café – but next time you are in Siem Reap, pop on in for a coffee or some home-cooked food! You can also visit APTBY which is on the same plot of land but in a separate building (for the privacy of our visitors).”

“From afar, you could definitely check out the APTBY website and consider sending a donation through our GoFundMe site or purchasing some of our merch which not only supports us, but other local LGBTIQ+ focused NGOs and/or individuals.”