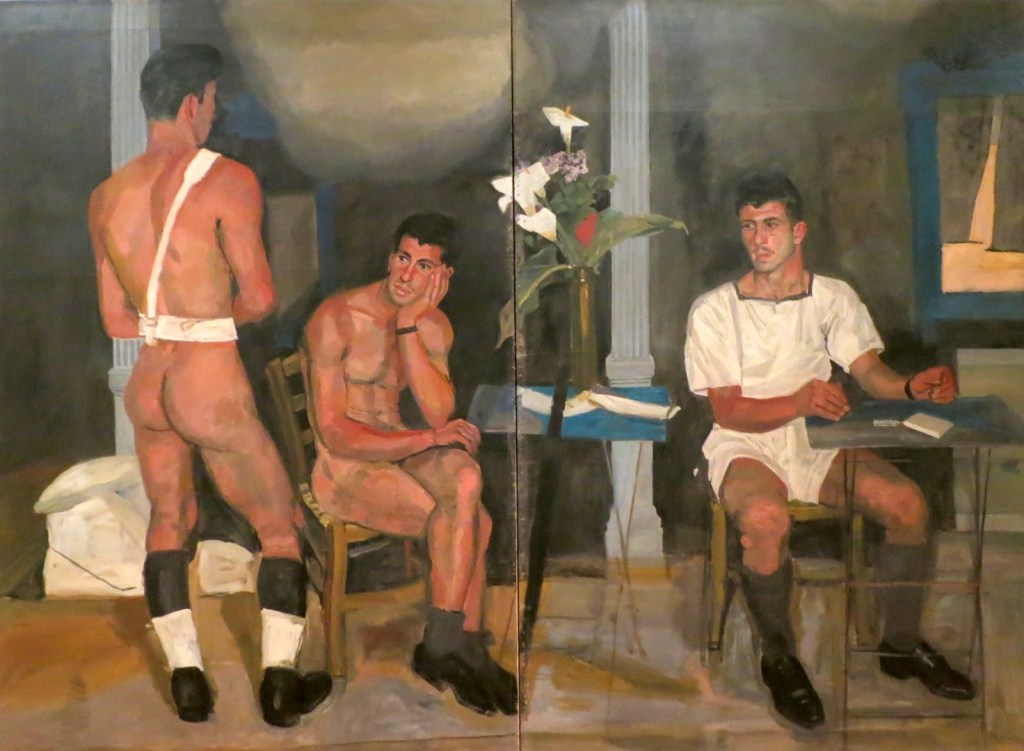 Yannis Tsarouchis is one of a group of twentieth-century Greek artists who portrayed and defined modern Greek identity. A sensual painter influenced by French Impressionism, Tsarouchis is a significant gay artist who painted images of vulnerable men and occasionally strong women.

Born in January of 1910 in Piraeus, Greece, Yannis Tsarouchis initially trained in the studio of Byzantine artist Fotis Kontoglou, an influential Greek modernist who introduced him to Byzantine iconography. He later studied at the Athens School of Fine Art, graduating in 1935, The major influence on Tsarouchis’ work, however, came from a trip to Paris, Istanbul, and Italy in the mid-1930s that exposed him to the bohemian lifestyle and both Renaissance and Impressionist art.

Tsarouchis’ work moved in two main directions: toward the orientalist and sensual, with strong influences from Matisse, and toward the ancient Greek ideal as expressed by the Renaissance and the Baroque movements. In doing so, Tsarouchis played a pivotal role, alongside his contemporaries,  in portraying and shaping modern Greek identity.

Returning to a war-torn Greece in 1936, Tsarouchis become a soldier in the Greco-Italian war in 1940. With a more political and humanist perspective after his service, he  began painting scenes of young men who were preparing to defend their homeland from the rise of Fascist Italy. Gay artist depiction of the soldiers and sailors was controversial; some of his exhibits were taken down by censors, who saw his work as unpatriotic and  degrading to the Greek male image.

Tsarouchis’ paintings of soldiers and sailors he admired captured not only a Greek identity, but also a gay awareness. Transforming Rodin’s bronze statue into an icon for Greek culture, he painted his 1936 “The Thinker”, showing a modern young Greek sitting on a cafe stool, a cigarette in hand, with a faraway look in his eye. Among Tsarouchis’ other paintings are:  the 1939 “Young Man Posing as an Olympic Statue”; “Sailor with Coffee Cup”painted in 1954; and the 1956 “Forgotten Guard”.

Yannis Tsarouchis established in 1949, along with other Greek artists including sculptor Nikos Nikolaou and seascape painter Panayiotis Tetsis, the “Armos” art group which worked to promote Greek traditional painting. In 1951 he had exhibitions in Paris and London and participated in the 1958 Venice Biennale. Gay artist moved to Paris in 1967 in a self-imposed exile to.wait out the years of military dictatorship in Greece.

During this exile, Tsarouchis designed theater sets for productions at Milan’s La Scala opera house, the Greek National Theater, the Dallas Opera, and London’s Covent Gardens, as well as the annual Avignon Art Festival in France. He also designed sets and costumes for films by Jules Dassin and Michael Cacoyannis. After his return to Greece in the middle of the 1970s, he designed an acclaimed operatic set for director Franco Zeffirelli’s production of Italian classical composer Luigi Cherubini’s comedic opera “Médée” at the ancient amphitheater at Epidauros.

Residing in northern Athens at the age of seventy nine, Yannis Tsarouchis died on July 20th of 1989. The Yannis Tsarouchis Museum, an art collection hosted in the artist’s home in Maroussi, Athens, was officially opened in 1982 in recognition of Tsarouchis’ contributions and respect for Greek culture. Upon the reading of his will and testament, it was found that Tsarouchis bequeathed all his assets to the Yannis Tsarouchis Foundation.