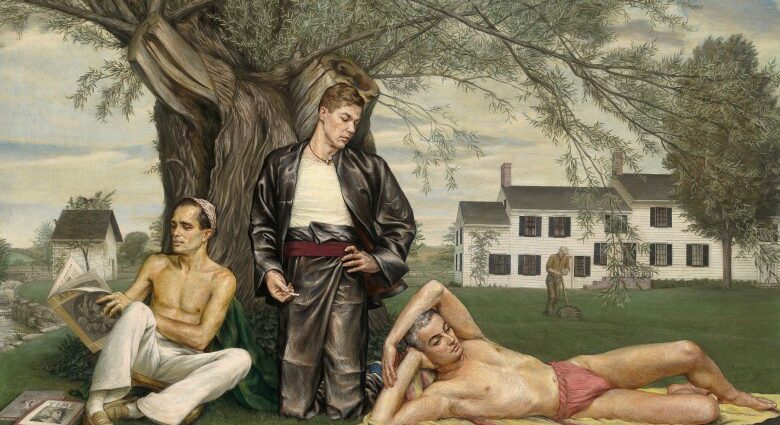 A scruffy, blonde boy purses his lips with languor. The painting could be from 2019 (body hair is so in these days). Pavel Tchelitchew’s “The Lion Boy” in fact dates to the late 1930s. The work is emblematic of New York’s vibrant underground gay artistic culture of that time.

Jarrett Earnest curated The Young and the Evil at David Zwirner to cast a light on lesser-known gay artists circulating through New York in the early 20th century. Walking through, I hardly recognized any of the artists’ names from my college courses. An unfamiliarity that may well be the consequence of the dark shadow that homophobia still casts on art history.

These artists latched onto figurative styles to revel in unabashed homoeroticism. That choice goes against the grain of modern art’s so-called progress towards abstraction in the early 20th century. (Let Clement Greenberg roll in his grave.) These works were radical for celebrating “the love that dare not speak its name.” That term, coined by Lord Alfred Douglas and floridly expounded upon by Oscar Wilde at his notorious trial, sums up the attitude at the time that queerness did not exist. Against this backdrop, a figurative piece of two (lesbian) women embracing was daring.

What is “too homoerotic”?

Some of this work might appear cheesy by today’s standards. For example, Paul Cadmus’s “Stone Blossom. A Conversation Piece” feels like a stilted homoerotic take on Édouard Manet’s “The Luncheon on the Grass” (1863). It was a bold gesture for its time — Cadmus was not exactly getting rich for it. Not many artists dared to appear to be gay.

Thankfully, there are some freakier, surreal works. Like Jared French’s “Murder” (1942). An idealized male nude with bloody hands stands over a screaming male nude. The work is intentionally cryptic but the message isn’t lost on anyone. French has often been left out of art history despite the high quality of his work. Likely because he was too homoerotic for the men writing and curating.

The Young and the Evil is a museum-quality exhibition of renegade artists who claimed the radical beauty of their queer love. Typically, we can only study these courageous works as tiny pictures in books.

I hope that this quick review of underground gay art pays tribute to deserving artists. Homoerotic paintings or drawings of young male models are exceptional. History of gay artists is always interesting topic for me. Its homoerotic content is inspiring even today when there is more freedom for artists. I will try to bring more articles covering history of gay art.