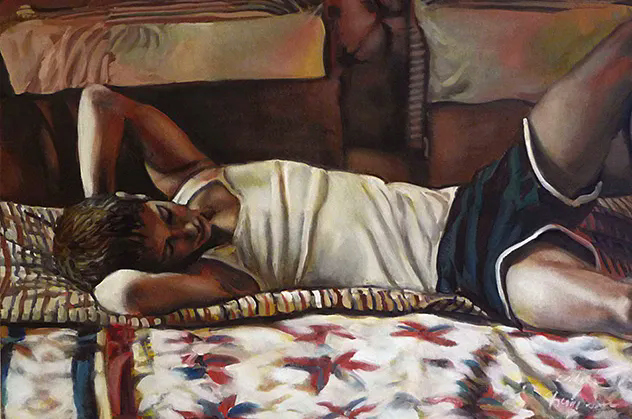 Readers sometimes comment that we only show the nude male in our portfolios. Mmm, partially true. Maybe take a look at our complete list of Artist Spotlights before you get on that bandwagon. But it is true that we do cover many artists who express their art with the male form. Hopefully there is something interesting going on with the art as well that  intrigues the eye and the brain at the same time.

And he meets his goal well. But there is much more here. Furguson creates mood and moments with his work — often quiet ones. His brush work and his masterly sense of color also make this work about much more than a young male torso. He paints the full spectrum of white: Bright whites, cool blue whites, lavender whites, morning whites, and late-afternoon-after-good-sex-whites.

In the tumble of sheets and pillows you can practically smell the human flesh that has warmed them, sweated in them, and dozed of in them. So, yes, much more than a male torso is happening here.

His work is featured on Men on the Net, in The Gay Art Forum, Tom of Finland, Gawker, Gay Business World, WWAR, Lamdba Business, BGay, GayPaintings, QTMagazine, and many other publications, including the 2013 book Capolovoro di Uomo (Masterpiece of Man) a collection of the best gay artists from around the world. (Click on this link to see a selection of these images.)

Check Furguson out at his Web site, and his Facebook page.