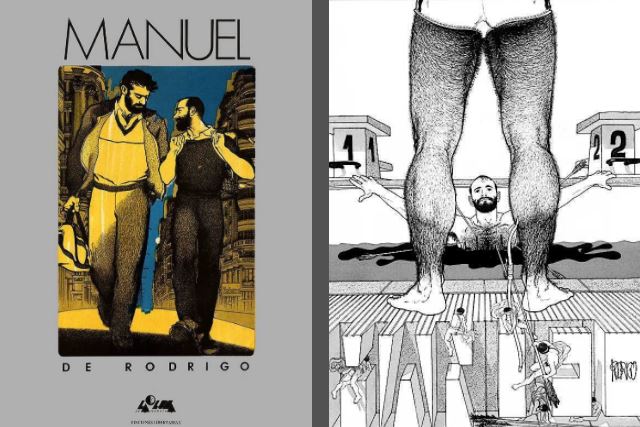 Born in Tangier in 1950, Rodrigo Muñoz Ballester was a draftsman, illustrator and a sculptor. He was considered one of the most representative draftsmen of Madrid’s “La Movida”. Countercultural movement that took place during Spain’s transition after Francisco Franco’s death in 1975. One of Rodrigo’s few works in the comic genre was “Manuel”, an experimental and unconventional work. Telling the tale of an nonreciprocal gay love story through an autobiographical character. The “Manuel” series was published in the monthly magazine “La Luna de Madrid” between 1983 and 1985.

Rodrigo’s technical perfection and his mastery of perspective are evidence of his training as an architect and his study of Fine Art. In his illustrative work, he shows his fondness for realism and the classical paintings in the Prado Museum; he also recognizes the influence of the painters he admires, such as Edward Hopper and fashion illustrator Antonio López.

In 2005, a compilation of Rodrigo Muñoz Ballester’s work, containing “Manuel” and seven other works not published in La Luna de Madrid, was published. Entitled “Manuel No Está Solo”, by Sins Entido, a Spanish publisher committed to graphic novels. Unfortunately, this compilation book is currently out-of-print.